One of our main goals with MOVEit 2018 was to enhance interoperability with other services and applications. That means more powerful workflows, and minimizing manual efforts and development time.

MOVEit  Automation has always had an API, but now, with MOVEit Automation 2018, we are able to use a modern REST API. A REST API allows us to interact with MOVEit Automation via HTTP. There are no dependencies on the client to speak of. This means that as long as we can write code in whatever language we prefer, we can use it to manipulate various things in MOVEit.

Want to know more about using REST APIs with MOVEit? Check out some of our tutorials from Microsoft MVP Adam Bertram:

Getting Started with Swagger UI and MOVEit's REST API

And, as always, you can try it for yourself with a free demo.

Hi, this is Jim Cashman, a product manager here at Ipswitch.

I want to show you a great new feature that has been added to MOVEit 2018, both for Automation and Transfer. 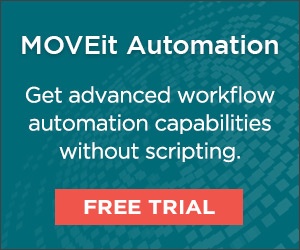 It's the ability to use REST APIs with our products, and we're doing that in three ways. We're allowing you, the end user, to call into MOVEit Transfer, and MOVEit Automation, using a REST API from your scripts, and we're also allowing you, in Automation, as part of a task, to call out to other REST services. And, what's more, as an added bonus, in order to make those outbound calls, we have added PowerShell to MOVEit Automation, as an embedded scripting language.

In the past, we've just had VBScript, but after listening to our customers, we know that their most requested scripting language, that they want integrated in MOVEit Automation, is PowerShell, so we've added that as well.

What I want to show you in this quick demo, is how you would use PowerShell in Automation, to call out to a REST service. In this case, we're gonna call out to Microsoft's Azure Blob storage. So, let's get started. The first thing I wanna show you is an empty folder directory, and we're gonna move some files to Azure, to that folder directory. So let's log in to MOVEit Automation and make that happen.

So, let's go look at a script I've already created for this demo. This is PowerShell, natively, in Automation, and just with 20 lines of script, I'm connecting to Microsoft's Azure Blob storage. Let's go see that run. I've got a task all ready. We see we're gonna run that custom script as the first step of the task, and then we're gonna take whatever files come out of that script and put them into a local directory, that I showed you at the beginning of the demo. So, let's run the task.

Says we're finished. Now, let's go take a look a the directory, and there they are. There are the files.

I think you can see that this is a great new addition to Automation. Not only is it the ability to connect to REST services out on the internet, and to make them part of your tasks, they can do anything. But, in addition, by using PowerShell to do this, we've added this great ability to use the PowerShell scripting language. You can use it for this REST activity. You can use it for local activity. There's nothing you can't do with PowerShell.

How to Use Secure Folder Sharing in MOVEit 2018

How to Use MOVEit Automation with Amazon S3